Next up for Spook-tober, Amanda Conner and Jimmy Palmiotti talk about Harley Quinn and Amanda’s Star Wars variant cover!

Carl: I’m here with artist and writer Amanda Conner, who has worked for MAD Magazine, and is the cover artist and co-writer, with her husband Jimmy Palmiotti, for Harley Quinn Rebirth – she also drew my dad’s favorite Star Wars #1 variant cover!

Carl:And artist and writer Jimmy Palmiotti, known for Deadpool, Heroes for Hire and Superboy – who co-writes the new Harley Quinn Rebirth with Amanda. Amanda and Jimmy, I’d like to ask you a few questions for my readers.
Did you want to become comic book creators when you were kids? 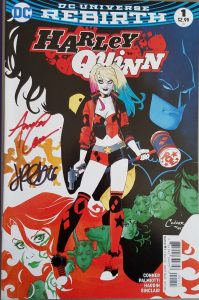 Amanda: When I was a kid, my first choice for a career was lion tamer and my second choice was race car driver, and my third choice was action movie star/superhero, but then I realized that wasn’t a real career choice and I was pretty good at drawing, so I decided that my best choice was comic book artist.

Jimmy: Yeah, I wanted to be a comic book artist…

Jimmy: … yeah, since I was even younger than you, I wanted to be one. So it took a while, but I finally got it.

Carl: What comic books did you read when you were kids?

Amanda: When I was very young, I used to be into Archie and Wonder Woman and MAD Magazine.

Jimmy: I liked Archie, I like Superman and I liked horror comics – the scary stuff.

Amanda: The comics I read now, all sorts of different comics. I like Love and Rockets. I like a lot of independent comics, I’m trying to think…

Jimmy: Yeah, it’s really good. And pretty much anything, I like to try a lot of new things. 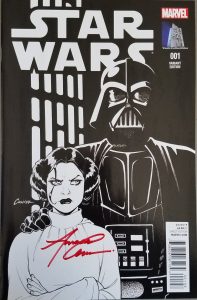 Carl: Amanda, have you ever shown your Star Wars variant cover to Carrie Fisher?

Amanda: No I haven’t! But I would really, really like to. I hope she would like it if I ever showed it to her.

Carl: Here at Comic Con, I’ve seen a lot of people dressed up as Harley Quinn. Why do you think Harley Quinn has become so popular?

Amanda: I think she’s really, really popular because she’s not perfect – like Wonder Woman is very perfect. Harley Quinn, she’s imperfect. Most of the regular people are imperfect, so she’s very easy to identify with.

Jimmy: I agree, I agree.

Carl: One last question: What MAD Magazine were you in?

Amanda: Oooh, I do not remember the number of the MAD Magazine that I had drawings in! It’s actually several of them. And I cannot remember which ones they are because I’ve done so many comics that it’s all just a big blur to me and I can’t remember!

Carl: Thank you for answering my questions. It was nice to meet you both.

Amanda: It’s such a pleasure talking to you!

Jimmy: Thank you, buddy! That was awesome, thank you! 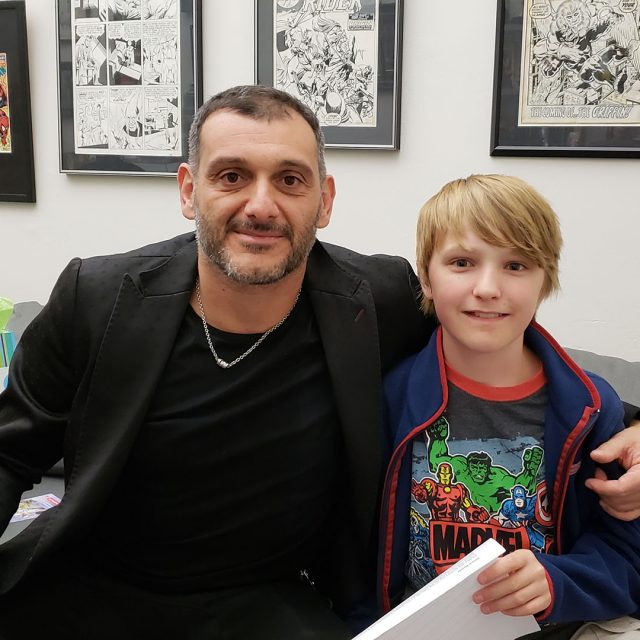