The cover we know was not the first. Steve Ditko drew a cover but Stan Lee told Jack Kirby to draw a new one. The cover that was published was inked by Steve Ditko but drawn by Jack Kirby.

This is Steve Ditko’s original cover: 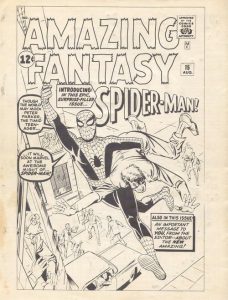 This is Kirby’s cover that we all know: 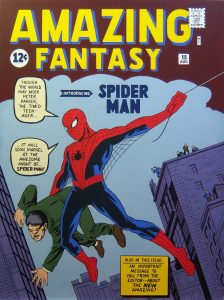 Ditko’s cover looks cool, with Spider-Man carrying a bad guy above the ground. You see people on the ground below and even someone in an open window looking right at Spider-Man. They actually used this cover as a variant for Amazing Spider-Man #700.

Kirby’s cover is bolder and makes Spider-Man look stronger with more muscles. He also looks higher up in Kirby’s cover than in Ditko’s. There aren’t as many people in the picture, either. 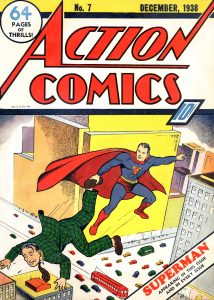 Action Comics #7 went on sale on October 25, 1938. In 1938, Kirby was working in newspaper comic strips. He started in 1936 at the Lincoln Newspaper Syndicate and worked there until 1939. At the same time, he worked at the studio of Will Eisner and Jerry Iger. So Jack Kirby was seriously working in comics when Action Comics #7 was released. He probably would have read it because Superman was new and superheroes were just getting started.

Could Kirby have gotten his inspiration for Amazing Fantasy #15 from Action Comics #7? My opinion is that he did. What do you think?