Two days ago, I met Larry Lieber at the Society of Illustrators. They had a barbecue and a lot of good illustrators were there. I had written him a letter that I was going to give him there. 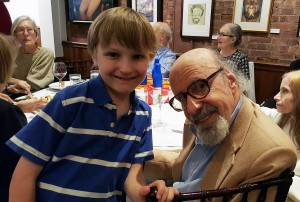 Larry Lieber is one of the co-creators of Ant-Man and he wrote the first Iron Man and Thor stories. He was the first to write about the Rainbow Bridge (the Bifrost), Loki, Odin and Asgard in the comics. He is also Stan Lee’s brother. 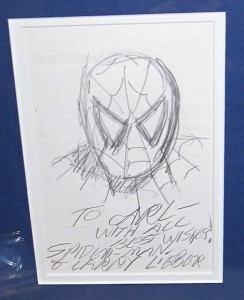 When I was 4, I got a drawing of Spider-Man by Larry Lieber that my Dad got for me when he met him at the Society of Illustrators. I wrote him a thank you note and he wrote back with a note and Spider-Man waving. So I’ve considered Larry Lieber a friend for half my life.

I never knew that I would meet a comic book legend. I felt really happy and like this moment would never be forgotten that I actually got to meet him.

He read my letter and he answered my questions. He was really nice to me. When I talked with him, it was really interesting and funny. 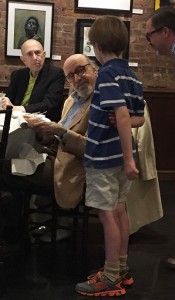 Carl: Did you want to become a comic book writer and illustrator when you were a kid?
Larry Lieber: Yes. When I was your age or a little older I wanted to draw comics. That’s what I wanted to do.

Carl: Did you see the Ant-Man movie? I saw it and thought that it was funny. Did you like it?
Mr. Lieber: Yes, I saw it and I did like it, but I’m not your age and it happens so fast, the action, that by the time I understand one thing that’s going on on the screen, they’re on to the next thing. It’s too fast. And when you’re my age… Dad, do you know what I mean? (My dad nodded).
But I did like it.

Carl: What comic books did you read when you were a kid?
Mr. Lieber: Captain America by Jack Kirby and Joe Simon. I read Human Torch, which I’m drawing now for the newspaper and Sub-Mariner. Always Marvel comics I read.

There was also a book called Crime Does Not Pay that I liked to read.

But basically I liked Jack Kirby’s art of Captain America and Bucky. When World War II happened and he went to fight, Al Avison took over and then Syd Shores. I read them all and loved them.

Carl: I draw a comic book character named Hammer Head. He has a shark head and human body. How can I make him better?

Mr. Lieber: Ask a younger artist! For 29 years, I’ve been drawing Spider-Man and my whole life I’ve been working with characters other people created. So I don’t know what advice I can give you, but keep at it and good luck!

Thank you Larry Lieber for talking with me and I hope we talk again soon. I feel really lucky that I got to have a conversation with you!