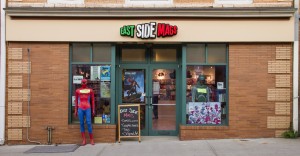 East Side Mags, our favorite comic book store, is near us and it’s having its first anniversary today. I started going when it first opened. I go almost every day and always on Wednesdays, because that’s new comic book day when the new comics come out.

There’s a big doll Iron Man standing outside. He used to have Spider-Man and Boba Fett outside, but Boba is now inside the window. When you walk in you see shelves of bobble heads and a lot of comics! 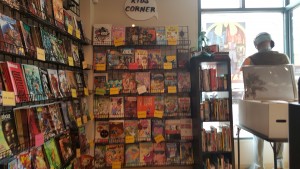 When I go in, I go to the Kids’ Center which has comics for kids, like Gumball, Mega Man, Mickey Mouse, Donald Duck, Simpsons, Ultimate Spider-Man Web Warriors and a lot of others.

The section next to it is the grown-up section that has T, T+ and Mature comics. Behind the counter are comics that cost $10 and up. They’re old comics or hard to find new comics like variant covers.

You also see the counter and Jeff Beck, the owner, is always there saying “Hey guys!” to the people who walk in. Jeff is a really friendly guy and once you get to know him really well he’s even nicer than nice! What makes him so nice is that he gives us great deals and does nice stuff for me, like holding comics. He even gave me three Pokemon packs for my birthday and came to my birthday party!

I like everything about the store: It has toys that my dad doesn’t let me get, bobbleheads and comics.

The first anniversary celebration is today. They’re going to have comic book artists and writers, a raffle, 20% off everything in the store and more. I hope a lot of people go!

I interviewed Jeff about his store two days ago and here is our conversation.

Carl: What comics do you collect?
Jeff: I don’t really collect comics anymore, now that I have the store. But I have started collecting sketch covers. Sketch covers are when the comic has a blank cover that’s plain white. I have a lot of artists that I host at the store and when they’re here, I ask the artists who I’ve hosted draw them for me. That makes them very special.

Carl: Why did you set up a comic book store?
Jeff: I love comics so much that I wanted to spend the rest of my life doing something that I love.

Carl: Do you like having a comic book store?
Jeff: I love it! Every week I get the best customers and I get to talk about all these different things like comics, movies and superheroes and artists.  I get to have all these cool conversations and hear lots of different perspectives and opinions. It’s really interesting.

Carl: What is your most favorite comic at your store?
Jeff: Hmm, good question. I’m going to say my favorite comic book that I’ve ever had in the store was X-Men #1. As someone who used to collect comic books, having a real life copy of X-Men #1 from 1963 was amazing. I never thought I’d hold one in my hands. And then I sold it to someone who really loved it and really wanted it, so that was great.

Carl: What is your most favorite thing about running the store?
Jeff: My favorite thing about running the store is the customers. Every day I get interesting customers coming in. Everyone has interesting stories about how they got interested in comics, what they like, what they read. And sometimes there are people who don’t know that much and want to learn and ask questions about where to start.
Every day, interesting stories come in through my door.

Carl: Thanks for answering my questions! 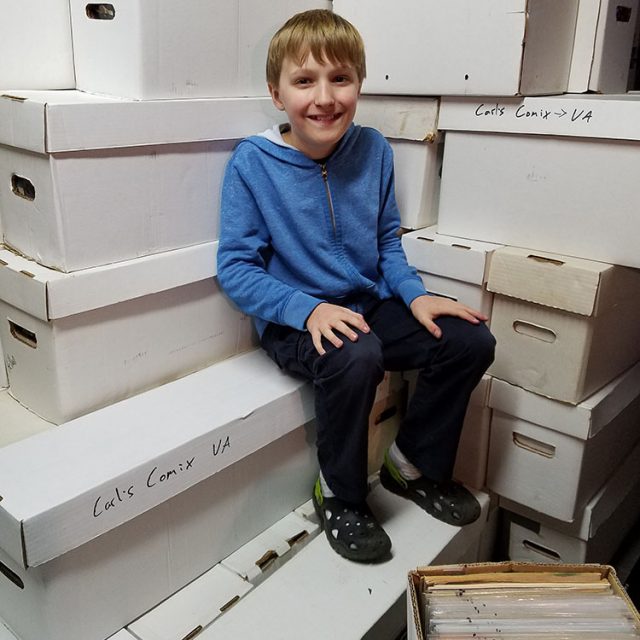