Living the Dream at Joint Base McGuire-Dix-Lakehurst 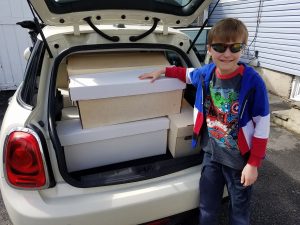 In my last article, I said that Jennifer Myers from the Department of Veterans Affairs had an idea. It was a great one! She suggested that I donate the rest of the comic books (8 long boxes that I had collected from my own collection and dealers, collectors and creators I know) to soldiers overseas. We liked that idea, so she arranged for us to visit Joint Base McGuire-Dix-Lakehurst, which is near Trenton, NJ. On April 5, we packed the boxes into the car. There were so many I got to sit in the front seat! When we got there, I thought I would get a tour and deliver the comic books, but I got a lot more than I expected! 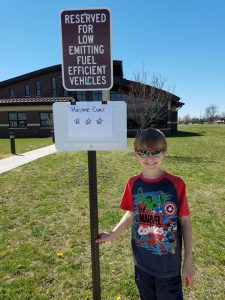 When I arrived, I saw that they had reserved a parking space for me with a sign that said “Master Carl.” My new friend Master Sergeant Dominick Griego met my dad and me in the parking lot and took us inside, and he and two of his co-workers carried in all of the boxes. I found out that they had planned a really neat and fun tour for us. 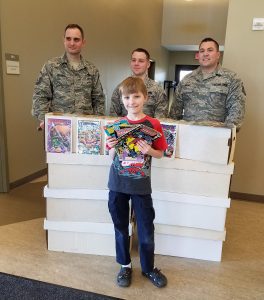 They took my us back outside and we went to see the military planes. First we went in a C-17 and I got to sit in the seats, go through the hatch on the top that led to the outside, and even go in the cockpit! They also taught me how to open and close the tracks, which are used to load things on and off the plane. Back outside, we also saw a KC-10 and also a helicopter and plane land from up close. 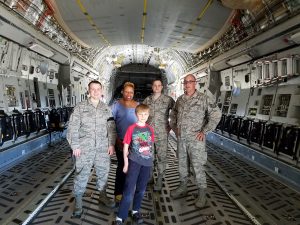 Next we met Chief Master Sergeant Nicole Sheleva. The Chief gave us a tour of the hallway with a history of the 87th Logistics Readiness Squadron. There was a big, framed American flag hanging in the hallway, too.

The Chief then introduced me to Commander Rayna Lowery, who is in charge of the 87th LRS. Commander Lowery told me about her “Dream Building Blocks.” Her motto is “I’m living the Dream” and the first letter of each building block spells out DREAM:

She said that this is how she wants all of her team to act to each other and to their jobs. She also told me that she wants the DREAM motto to grow so everybody can use it. After that she asked me some questions like: how I got my start in my comic book adventure, how I came up with the idea for my website, and who have I interviewed. Then I had a question for her: do you read comic books? The Commander said that she doesn’t read many comic books, but that she loved to watch Disney shows with her daughter. I told her that I interviewed Dan Povenmire, co-creator of Phineas and Ferb, and she thought that was really cool.

Sergeant Griego took us to the Armory, the place where they keep all of their military gear. I tried on a vest, which weighed 35 pounds! I could barely stand! They also put a helmet on me which weighed 8 pounds. It was almost like I had my own me on my head!

Luckily I was able to take off the gear in a few minutes because right after that there was an unexpected fire alarm. Everybody had to evacuate the building so, since everyone was together outside, the Commander told everyone what I was doing there. They all gathered around and 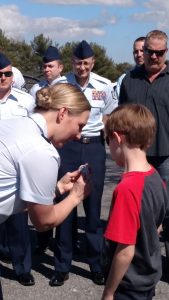 And then we were able to go back inside, to Commander Lowery’s office, to take some photos. The Chief surprised me by presenting me her coin of excellence, too. The coin has the words “integrity,” “service” and “excellence” on the front and “lead,” “inspire” and “dream” on the back. She gives these coins to anyone who does a spectacular job. I felt really honored!

After we took the pictures, we said goodbye to Chief Sheleva and Comander Lowery, and Master Sergeant Griego took us to his office. He gave me a wristband that he got at the NJ Run for the Fallen and then he asked me which coin in his collection looked the coolest. The coins commemorate deployments that a soldier has been on. He said that every coin has a story. I looked at all of the coins on every single shelf really closely and I finally chose one. This coin is set inside an American flag and commemorates his role with Special Inspector General in Afghanistan. He told me that the story behind this one was about the time he survived an attack in Afghanistan. I later learned that he received a Purple Heart and Bronze Star for his bravery when he helped save other soldiers in the attack. After he told me the story, he said he wanted me to keep it as a memory of helping soldiers overseas. I was so surprised and honored that Master Sergeant Griego would give me something so special to him. 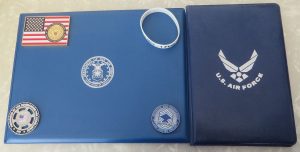 Jennifer Myers spoke with me to make sure I understood what these coins meant and that I would always treasure them. We all hugged goodbye and thanked her for setting up such a special day. I do not think I have ever felt as special and welcome as everybody at Joint Base MDL made me feel!

Thank you to Jeff Beck, Paul Castiglia, Steven Donohue, John Paul, Adam Solomon, Laurie Jeffers and Michael Williams for helping make this all possible. And a huge thanks to Jennifer Myers and everyone Joint Base MDL for everything!
It was the best day of my life! 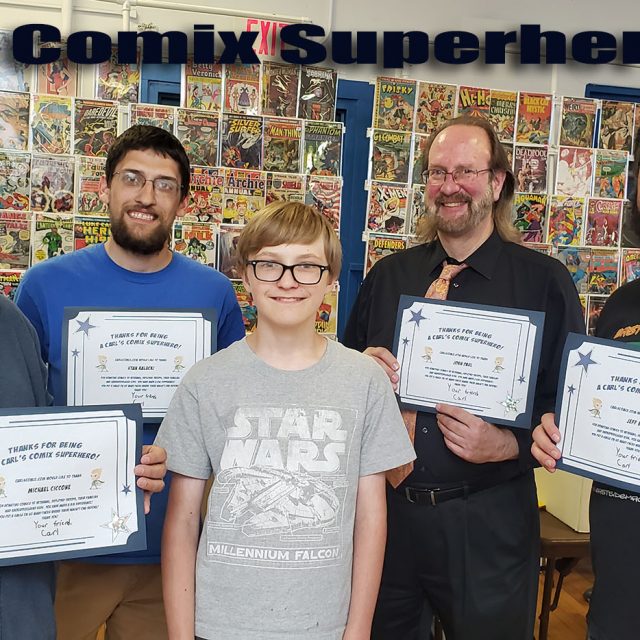 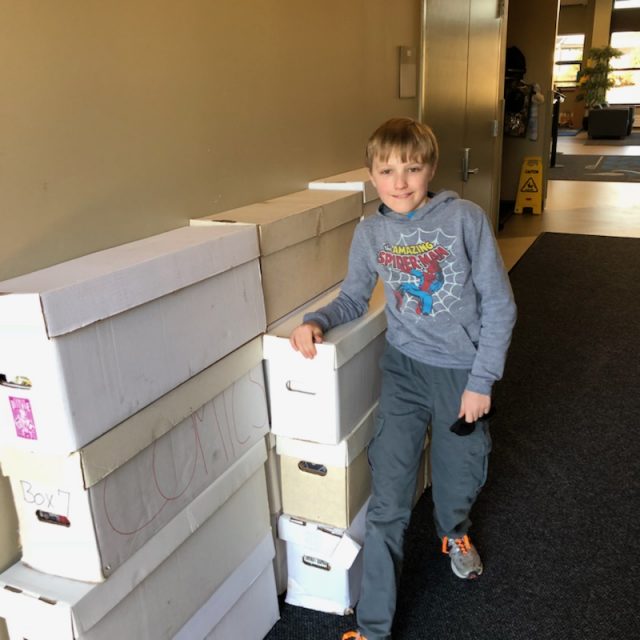