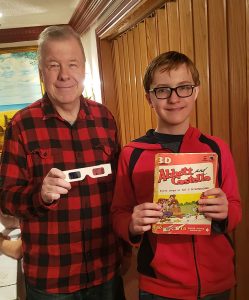 Hey Abbott!!! Here’s something really cool: my friend, Bob Furmanek restores old movies and comics for his job! He has restored 3D movies like It Came from Outer Space and Revenge of the Creature, as well as a whole ton of others. Right now, he is working on restoring an Abbott and Costello movie: Africa Screams! Since this movie is 2D, you know he had to get some 3D in there, so he is also restoring an old 3D Abbott and Costello comic from the ‘50s!

If you’ve never heard of 3D comics, they came out in the 1950s – around the same time that 3D movies came out. Ironically, 50 3D comics came out and 50 3D movies came out – the exact same number, even though they weren’t related to each other. To view 3D in the comics, you had to wear red and blue glasses. One way that companies saved money on 3D comics is that they would put in instructions on how to make your own 3D glasses, which sounds like a cool idea now if you don’t get a pair when you find an old 3D comic. Bob wrote a whole article about them on his site that you

should take a look at if you think 3D comics sound fun. You can see some of the 3D comics there, like Batman, Superman, Mighty Mouse and even Captain 3D, which Steve Ditko helped draw!

So, who are Abbott and Costello? Well, if you’ve been living under a rock, they were the most popular comedy group in the 1940s and ‘50s. They are incredibly funny! Sadly, they only made one 3D Abbott and Costello comic, the one that Bob is restoring. If you’re my age, you need older friends and family to tell you about them, but watching and listening to them is totally worth it. 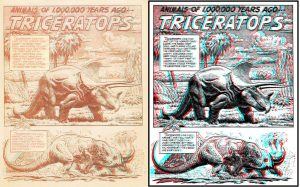 If you have 3D glasses, click on this and try them – it really works!

The comic Bob is restoring is going to be included in the DVD, so you can read it on a screen. And it’s going to come with a pair of red and blue glasses that look like the originals, so you won’t need to make your own. Bob has shown me some of the comics he’s restored before and they look great. Here’s a before-and-after picture of one of his earlier projects. When you look at the restored version, it’s like the comic is brand new – maybe even better.

Bob is raising money on Kickstarter to get this all done. It ends on December 30, so you really shouldn’t wait. Why should you help him? To sum it all up, he can do amazing things if you help him on Kickstarter. If you support his movie and give him just $10 on Kickstarter, 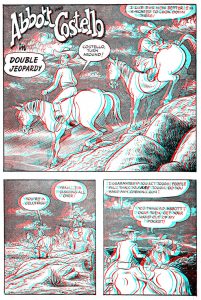 you’ll get your name in the credits and on his website. For $25 or more, you’ll also get the DVD with the restored Abbott and Costello digital comic AND 3D glasses! I like to support projects on Kickstarter because it feels like you are helping make the project.

Things like this wouldn’t get made without the help of people like you and me, so what are you waiting for? Go do it!

Let’s Save Abbott and Costello!
Liked it? Take a second to support Carl on Patreon! 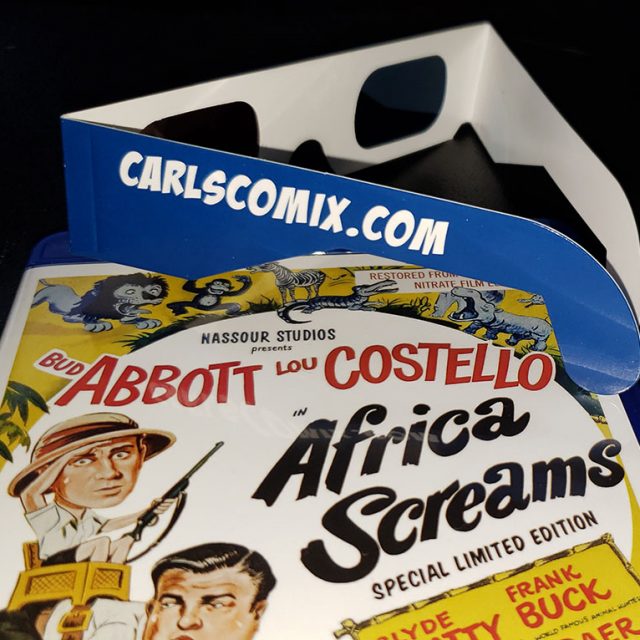