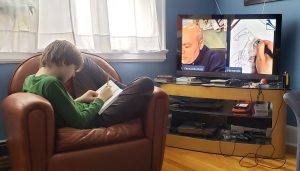 Hey everyone! I was looking at the Kubert School website and I found something really cool and fun to do during quarantine! The Kubert School is holding drawing lessons for the rest of the month. The classes are held on Facebook at 10 AM EST on Saturdays. The first one was on April 3 and artist and teacher  Fernando Ruiz taught us how to draw Superman. 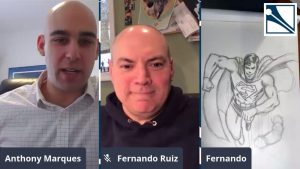 I’ve been lucky to get to know a lot about the Kubert School because a lot of the people I’ve interviewed are teachers there or have graduated from there. Sometimes they’re both! It was founded by legendary Hawkman & Sgt. Rock artist Joe Kubert and teaches how to be a comic artist and illustrator. It’s run by Anthony Marques, who is a really nice guy and a comic artist who also owns a comic book store.

The class was taught by Fernando Ruiz, a comic artist most well known for his work on Archie as well as lots of other projects including Die Kitty Die. I have interviewed him but have not been able to post it yet, so stay tuned for that. He’s another really nice guy and a great artist who teaches at the school. 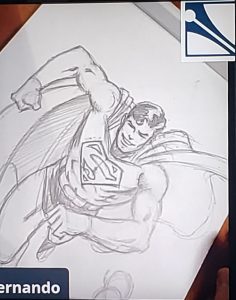 On Saturday, Fernando taught us how to draw Superman in 2 ways. The first was a bust tutorial and the second was an image of him flying at us. He told us a neat strategy for the “S”. It’s to draw the space outside it so that the area around it makes it looks like an “S”.
He also taught us about foreshortening. Foreshortening is making something look like it’s coming closer to you. I learned that one way to draw people is to start with an oval, and then to make it foreshortened, you layer the shapes as you go, making each oval a little bigger than the last. That way it looks like Superman’s arm is reaching out to you.

My family and I all took Fernando’s class and we did pretty well, for our first lesson. We’ll definitely take the next classes because we had so much fun. Scroll all the way down to the bottom to see our version vs Fernando’s.

For the next three Saturdays the artists will be
Maria Sanapo, an Italian comics illustrator/artist who has worked on such things as DC’s Bombshells, Wired Magazine, and others.

After her, the teacher will be Sergio Cariello, who has worked on Batman, Batwoman and Wildcat, Captain America, and other cool stuff.

For the final class, the artist is going to be Lee Weeks, who worked on characters like Spider-Man, Batman, Captain America, and lots of other major titles!

You should definitely check this out. We all had fun with it and, as Fernando told all of us, the way to get better is to just keep drawing!

If you end up not being able to make the art lessons on Saturday morning, don’t sweat it! You can see them all on their Facebook page here (be sure to click on the Videos section on the left).

Here’s how me, my mom and dad did with Fernando’s lessons: