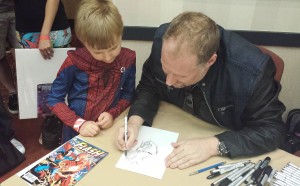 When I met him, he drew Golden Age Flash and Two Face for us. Here they are: 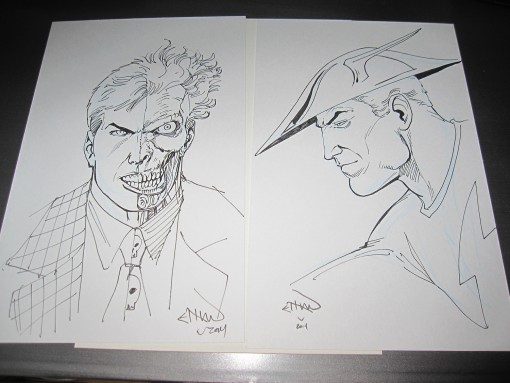 This year at Garden State Comic Fest I saw him again and I interviewed him. He was very nice and answered my questions on video.

Here’s what we talked about:

Carl: Did you want to become a comic book writer and illustrator when you were a kid?

Ethan Van Sciver: I think I was about 11. How old are you?

Ethan Van Sciver: Eight? Yeah, I didn’t read my first comic book until I was about 11. I had comic books around, but I didn’t really read them, I just looked at them. When I read Man of Steel #1 around 1986, then I realized, “yeah, I want to be a comic book artist.”

Ethan Van Sciver: When I was a little kid, before I was actually reading them, I was just buying them, I liked Ghost Rider, I liked Star Wars, I loved the Hulk –I always loved the Hulk. And my favorite superhero was Superman.

Ethan Van Sciver: I would say my most fun comic to draw was Green Lantern Rebirth #1. That was a lot of fun, because it was a mysterious story and there were a lot of chances to draw scary images.

Carl: I made a superhero named Hammerhead. He has a head shaped like a hammer. How can I make him better?

Ethan Van Sciver: Well, I guess in order to make him better, I would give him a nice cool costume that made him look original. I would also think about giving him an interesting personality and interesting goals as a character. Does he just want to rob banks or does he want to rule the world?

Ethan Van Sciver: Oh he’s a good guy, oh ok! Hammerhead sounds like a bad guy. If he’s good guy I guess I’d want to work on also making his villains just as scary to make him a better hero.

Carl: Thanks for answering my questions.

Thanks again for answering my questions, Ethan. I hope you have a good summer!