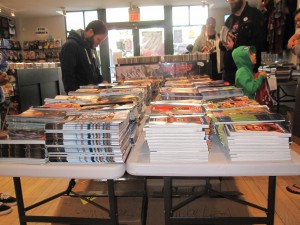 Free Comic Book Day was May 2, 2015. That’s when you go into a comic book store and there’s a bunch of free comic books that you can choose. I went to East Side Mags in Montclair.

We went to the store twice. The first time, we went early so we could get free comics  before the comics were gone. We didn’t need to worry about that because there were plenty.

We went a second time later in the day so we could see Paul Castiglia, who writes for Archie. We also met Stephen Coughlin, a comic book illustrator. We got a book about bullying from Paul and he signed it. Stephen drew me a Reverse Flash sketch for free! 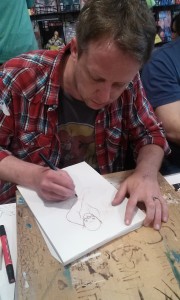 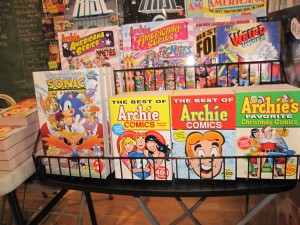 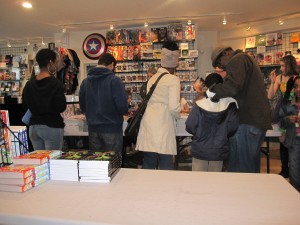 e a lot of people there the second time we went. There was a podcast about comics and toys in one corner. Everything was 20% off, too. The store gave everyone there free Convergence comics. (Every DC superhero is closed up in a city with a dome on it and they have to battle other superheroes to see which city will survive.) That wasn’t going to be part of free comic book day but the store decided to give Convergence comics out for free. That was good because the Convergence stories are awesome. They are so cool that now we want to keep buying them.

There was a costume contest, too. We don’t know who won, yet. I saw a Batman costume, as well as Spider-Man and a girl Joker, which you don’t usually see. I went as Dr. Octopus. 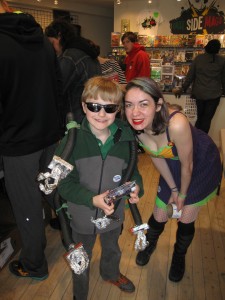 Thank you, Jeff, for having Free Comic Book Day at my local comic book store. It was very fun!