How To Make A Good Trade 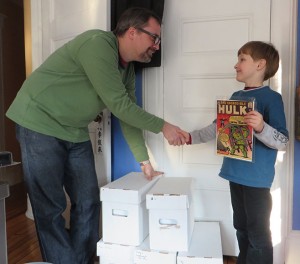 Here’s how you make a good trade:

First, you get a double of a comic or a Pokemon card or a baseball card. You want to trade doubles because if you have a single and trade it, you’ll have zero of it. Or, you can trade things that you don’t really want.

Second, you find someone who wants it. If you know someone, you can just call them. But when you don’t know a person, you can write online, like on Craigslist (Dad’s Note: Kids, don’t use Craigslist on your own – make sure a grown up does it for you).

Third, the person comes over to take a look at what you have. They have to have something really good (and a double of it) that you want.

You should trade one for one, like one really old comic for another really old comic. Sometimes you don’t trade one to one. We just traded 1,000 comics for one comic. That one comic was Hulk 6, so now we have Hulk 2, 3,4, 5 & 6. We both got what we wanted. They got a bunch of comics we didn’t want and we got one that’s really rare.

And that’s how you make a good trade.