Don’t worry if you can’t make it to a comic book show – Carl’s Comix is bringing the show to you! We’re going to be publishing a lot of great interviews from before the world shut down, starting with this fun one with the one and only Jim Balent! Hope you like it!

I’m here with artist and writer Jim Balent, best known for his 6-year run on Catwoman (note: Jim silently made it clear it was 7 – sorry Jim!), as well as his work on Batman and Lobo. In 1999, he founded his own comic company called BroadSword Comics, which he runs with his wife, Holly Golightly. He launched his own indie series Tarot: Witch of the Black Rose, which he has been writing and drawing since 2000!
Jim, I’d like to ask you a few questions.

Jim Balent: No, I’m sorry. I don’t take any questions!

Nice. What comics did you read when you were a kid?
Jim: Oh, well, Batman and Spider-Man mostly.
Spider-Man is my favorite comic book superhero.
Jim: Spider-Man?
Yeah.
Jim: Which version do you like in the movies?
The newer movie version one.
Jim: OK! It’s a good movie!

Do you read comics now or are you too busy?
Jim: Well, that’s funny. I am very busy creating my own work. There are times where I’ll buy a trade paperback and read that. I think for the past year I haven’t been able to get to a comic store on my own, besides work. I’ll go to a comic book store and do book signings there, but very rarely do I get a chance to go out and pick up some comics. Between the 2 answers, I am too busy to read comics. Sounds terrible to say.

What a shame. What was it about Catwoman that made you want to work on that book?
Jim: Well, first, once again going back to the Adam West days, I’m a huge Julie Newmar fan. So, when I was offered the incredible opportunity to draw Catwoman, I took it because I just love the whole Batman family and I loved Catwoman. She’s a very strong, independent woman and that’s what made me really attracted to this character.
Nice!
Jim: He always says “nice!” (laughs)

You’ve worked for pretty much every major publisher. Is there a big difference between working for Marvel, DC, and Dark Horse?
Jim: I don’t know if there’s difference in companies. It’s more of your editor, whoever you’re working with. And I’ve been really blessed with working with the best editors, because they’ve really allowed me the freedom to create. So, I would say that it really comes down to, not the company, but it comes down to the individual editor.

That’s good that you’ve gotten good editors. What made you decide to create your own publishing company?
Jim: Well, in the year 2000 the opportunity came about where I wanted to create my own character. I’ve been drawing since I was five years old, creating my own characters. So, I thought okay for the past 7 years I’ve been drawing Catwoman and I thought “Well, why don’t I try to do that childhood dream and publish my own work?” So, in the year 2000, that’s what I did. I started a company with Holly Golightly. Holly, say hi to the camera!
Holly Golightly: Hi camera!
Jim: She also drew from Archie comics. She drew Sabrina the Teenage Witch and Josie the Pussycats. So together we joined forces and we said “Let’s start our own company!”.
Wow, cool!
Jim: Of course it’s cool!

You’ve been working on Tarot, Witch of the Black Rose longer than I’ve been alive! What is it about the character that keeps the book interesting for you?
Jim: Well, once again, a lot of times, it’s about a strong fem 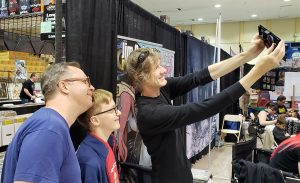 ale character and a lot of times I draw my friends into the books. So, I can get to draw them as vampires or as witches… So, it always keeps it fresh with me because it’s just something I’ve always been interested in since I was a little kid: to create my own company and my own character. I’m sure you do the same thing.

Yeah! Do you draw them as witches and vampires to get revenge on them?
Jim: No, I don’t do that! What kind of a weird kid is this?!? You don’t draw comic books to get revenge on people! I do it because I like it! Did you like raise a supervillain or something?

Carl: I belong in the Supervillain Rink! (ed. One of the halls at Garden State Comic Fest).

Dad: He found out there’s money in it – in world domination.

You and your wife, Holly Golightly, run Broadsword Comics together. Do you two divide different parts of the work between you or do you do everything together?

Jim: Well, with the Tarot book, I write it, I illustrate it, all the covers I do myself. For the interiors I do the pencils and inks and Holly colors it on her computer. And also, she does all the production work and the ballooning. So, in a way we did split up the workload. It’s just the 2 of us. For the past 20 years we’ve been on time with our book, it’s a bi-monthly book. And we’ve been pretty proud of that because it’s just the 2 of us – we’re not Marvel or DC. Sometimes they blow their deadline. We’re in stores every 2 months or something like that. We’re really proud of that and we’re working hard.

Thanks for answering my questions! It was really nice talking to you!

Jim: (deadpan) It was very nice talking to you.