Carl’s Comix is filling the summer with conversations with some of your favorite artists since you can’t go meet them at comic book shows. We have a bunch of Carl’s Comix Classics from back before things got crazy out there! Be sure to subscribe here or on YouTube so you don’t miss out!

I’m here at Garden State Comic Fest with Eisner Award-winning cartoonist, comic book artist and illustrator Joe Staton, who is best known for his decades of work on DC Comics characters like Batman, Green Lantern, The Huntress, Plastic Man and the Justice Society of America, and also Jughead and Scooby-Doo as well as the comic strip Dick Tracy.
Mr. Staton, I’d like to ask you a few questions for my readers.

Mr. Staton: It’s the only thing I ever wanted to do and I wanted to draw comics at least since I was 3 years old.

What comic books did you read when you were a kid?

Mr. Staton: I read Superman, Superboy and I read a lot of Western comics. In those days they were comics based on TV shows and Westerns. I really liked those.

Neat! What comics do you read now?

Mr. Staton: I don’t really read many comics these days. I look at old stuff, I read Squirrel Girl and Black Panther, those are probably the only books I actually read now.

How did you get the inspiration for E-Man?

Mr. Staton: Well, E-Man was a character my buddy Nicola Cuti, who was an editor at Charleton Comics, came up with. He wanted to have a character based on what could be done with energy and he could change shape and it was kind of funny but was still a serious character. I worked with Nick and I did the drawings that matched his ideas.

Mr. Staton: Well, I think the favorites for me would be between E-Man, which, you know, we’ve just talked about, and the Huntress. There’s the Huntress right there. The original Huntress was the daughter of Batman and Catwoman.

Mr. Staton: I really liked her.

You’ve drawn Dick Tracy since 2011. Was that a dream of yours to draw him?

Mr. Staton: Actually, it is. It’s probably the first dream of comics I had. Like, I told you before I wanted to be a comics artist since I was at least 3 years old. Well, my family story is that they found me at the middle of the kitchen floor trying to trace Dick Tracy from newspapers when I was 3 years old. So, it goes back that far. It just had to come around.

What’s the difference between drawing a good comic book and a daily strip?

Mr. Staton: Well, there’s never a break in the daily strip. You’re always late. If you draw comic books, you do one and then there’s a little break and then it’s time for the next one. But, if you’re late for the comic strip there’s a hole in the newspaper. So, it never gives you a break.

One last question: are you having fun at the show?

Me too! Thank you for answering my questions. It was nice to meet you.

Mr. Staton: Thank you for having me. 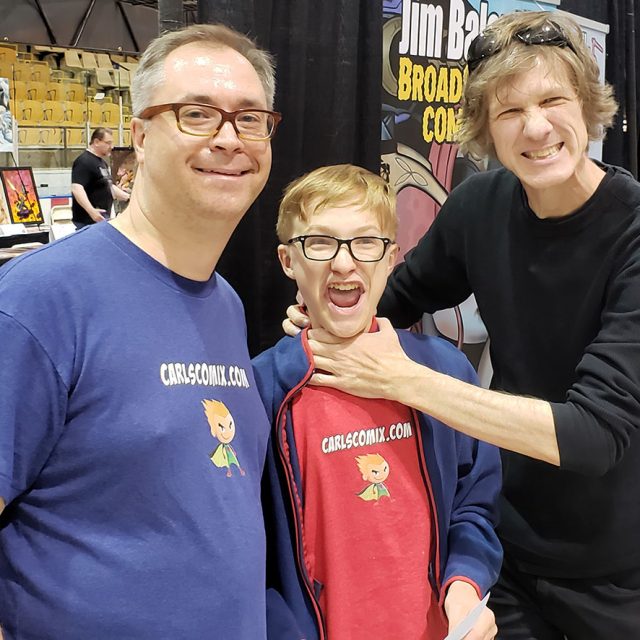