I met Neal Adams at Garden State Comic Fest in July, shortly after I spoke with Ethan Van Sciver. In Overstreet’s Comic Book Marketplace, Jim Shooter wrote about Neal Adams, that he “is one of the greatest artists our medium has ever known. He is also the most influential artist in the history of comic book publishing.” 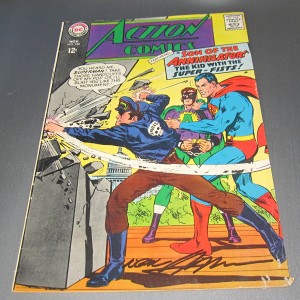 He is most famous for drawing Superman, Batman and Green Arrow. The first superhero comic book cover he drew was Action Comics #356. When I met him, we asked him to sign our copy of it.

Then, I asked him if he would do an interview with me and he said yes.

Carl: What comic was your most fun to draw?
Neal Adams: Well, all comic books are fun to draw because they give me money after I do them. But I have to say that Batman Odyssey was my favorite to do.

Carl: What comics do you read now?
Neal Adams:  I read everything that is good, because you know that they change artists now and then and when they change artists, sometimes that can affect the quality of the comics. So what I really do is I follow the good artists. Sometimes a good artist works on Spider-Man, sometimes they work for Batman, sometimes they work on Avengers, so wherever they’re working. Right now, there’s a good artist – a couple good artists – working on Batman, so I do now pay attention to those, but I also read the Marvel comic books, with a guy by the name of Bachalo and Johnny Romita, Jr. and there’s a bunch of other guys that I read as well.

Carl: I made up a superhero named Hammer Head. He has a head shaped like a hammer. How can I make him better?
Neal Adams: Well there is actually a hammerhead shark, so maybe you want to make him into a hammerhead shark who walks on the land. I actually think there was a character called Hammerhead. You could probably look that up on the Internet to see if there was. I believe there was a character called Hammerhead.

Carl: What do you like the best about drawing Batman?
Neal Adams:  His cape. Because it’s like drawing another character. His cape, it flows in a particular way that you can take advantage of it as a drawing and use what is called negative space and positive space and it makes a very good quality and entertaining thing to draw.

Carl: Thank you for answering my questions.
Neal Adams:  You are quite welcome, young man. I was delighted!

I was very excited that he mentioned Supersnipe, because it’s a fun and funny comic that we enjoy. A lot of people don’t know it anymore, but I’ll be writing about it soon.

Oh, I looked up whether there was a Hammerhead character. There is, he’s a Spider-Man enemy. He is different from my Hammer Head character because mine is a hero and this one is a villain.

Thank you Neal Adams for letting me interview you!