I’m here at Garden State Comic Fest with artist Neil Vokes, best known for co-creating Eagle and his work on Superman Adventures, Tarzan the Warrior, Untold Tales of Spider-Man: Strange Encounters and a lot of others. Neil, I’d like to ask you a few questions for my readers.

Mr.Vokes: I of course wanted to be a comic book artist ever since I was your age, probably younger. I used to draw all the time. Draw the stuff – and my dad always wondered what was wrong with me because he didn’t like superhero comics very much. He used to let me buy the World War II comics, like Sgt. Rock and Sgt. Fury because that was okay in his generation, “but superheroes were weird” you see. But I did want to be one when I grew up.

Mr.Vokes: Well when I was a kid it was back in the 60’s, 1960’s. And so the first Marvel books came out the first Spider-Man, the first Fantastic Four, and all those, and I was a Superman fan, a Batman fan. I read all those original books by Jack Kirby and Curt Swan, all those classic books that you’ve probably heard something about. Like this particular drawing that you’ve got is based on Spider-Man Annual #1 back in 1964 when I was a kid. I’ve always loved that.

Carl: Who were some of your favorite comic book artists as a kid?

Mr.Vokes: Well, Steve Ditko who created Spider-Man, and Jack Kirby, Alex Toth, John Busema, and Gill Kane was a good favorite of mine also, when he was doing Green Lantern, in fact I’m drawing a Green Lantern piece now, and I loved his Green Lantern, he had a lovely style. All those guys from that era were a very big influence on me, yes.

Mr.Vokes: I actually don’t read a lot of comics anymore. I started in the business in the mid 80’s and the more work that I was getting in comics the less comics I was actually reading. So, my comic book reading is very, very sparse nowadays. I’ll pick up mostly, you know, those big collections of the old comics? (The black one with the masterworks and things like that?) That stuff I still love to get. Because I can’t really afford to get the original versions, so, I get the all the big collections. And the new comics I’m not really familiar with.

Carl: I have a piece of art you drew that is an “homage” to Jack Kirby. And yesterday, you had this one up at the Garden State Comic Fest charity auction that’s an homage to Steve Ditko. How hard is it to draw like another artist so well? What do you have to do differently than when you draw your own style? 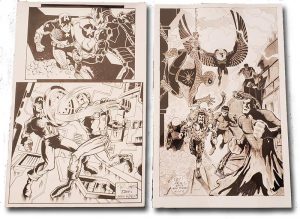 Mr.Vokes: Well, the thing is, because particularly these 2 artists are an influence on me, because when I was a kid I loved this stuff so much, it’s actually very easy for me to slip into their style. Especially when I was drawing Spider-Man, which I’ve done a couple of Spider-Man books, it tends to look like Steve Ditko might have had something to do with it because I can’t picture drawing Spider-Man or Doctor Strange, unless it looks something like Steve Ditko. And the same thing with the Kirby characters. Like if I’m going to have to draw the Thing, it is going to look like Jack Kirby had something to do with it. It’s just natural. In my head nobody else drew those characters. You know? The original Steve Ditko run on Spider-Man ended in issue 38, and then John Romita took over. John Romita was a fantastic artist, but was not my Spider-Man artist. To me, Steve Ditko was always going to be the Spider-Man artist, no matter how good the other artists were. So, I only really, in my head pictured those guys, and in this particular one, the Kirby one, I actually used a cover that he drew as an inspiration, and then tweaked it a bit and made my own.

Carl: Whenever I see you at a comic book show, you look like you’re really busy working on commissions. What are you working on now?

Mr.Vokes: Well, as I was saying, I have a blank sketch cover, a Green Lantern sketch cover. And I thought I’d draw an old Hal Jordan piece with Star Sapphire which is his girlfriend and became a villain. So, I’d thought I’d do that.

Carl: Neat! Thank you for answering my questions. It was nice to meet you.