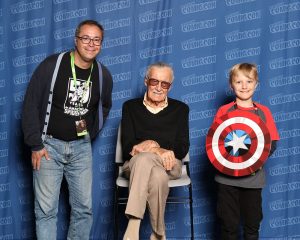 Stan Lee died yesterday at age 95. I bet we’re all upset. To start this off I’m going to say what an excellent creator Stan Lee was. He created multiple fan favorite comics and just was a really nice guy.

I remember when we were getting our picture taken with him, when we were done, he told me “Now go get the bad guys!”.

I got to meet him a few times and I was super close to interviewing him, but he had to cancel at the last minute because he was so exhausted. I’m still upset about that.

He was a truly ingenious creator. Spider-Man, Hulk, X-Men, even the Fantastic Four. We not only pay tribute to him on this sad day, but we also pay tribute to his characters, as we will forever.
Stan Lee R.I.P. 1922-2018

Here’s what my questions for Stan were going to be:

Intro:If you’re on my site and don’t know who this is, you’re crazy! True believers, I’m here with the one and only Stan Lee! Mr. Lee, I’d like to ask you a few questions. 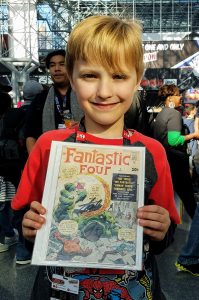 He signed this for me at Comic Con!

• This is the oldest comic book I have that you worked on. It’s Mighty Mouse #1 from 1946. What was it like to work on comic books back then?

• I met your brother Larry last year and he told me that you created the characters he wrote about and you would give him a synopsis for what to write. How did you think of so many characters?

• What character did you have the most fun creating?

• You’re known for a lot of catch phrases, like calling fans “True Believers” and saying things like “Excelsior!” and “Nuff Said!” How did you start thinking of all these catch phrases?

I’m sorry I never got to ask him these. We will all miss him. 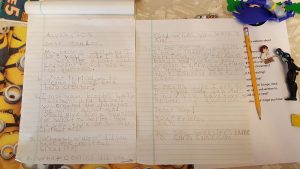