I have some amazing news! We just recently donated our 30,000th comic book!

We gave the most recent donation to the military base Joint Base McGuire Dix-Lakehurst. From there, they will once again be delivered to deployed troops in bases, ships, and veterans’ hospitals around the world. 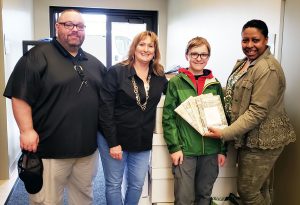 Donating Comics to the Base!

I would like to thank everyone who has donated so much. You are truly amazing! We started off with 300-400 of my own comics and so many people in the comic book community were super supportive! Me and my dad never expected to get anywhere near 30,000 comics but we did it and more donations keep coming in.

As a matter of fact, Vincent Zurzolo and the team at Metropolis Comics and Collectibles just told us that they want to donate over 10,000 comics to our next donation!!! Thank you everyone at Metropolis for being so generous!

Since my first donation 2 years ago, I’ve gotten a lot of attention! It’s been really fun to be on TV, radio, and newspapers all around the world, but for me the real heroes are the ones who donated! I recently presented a certificate to everyone who has donated comics that signifies them as a CarlsComix superhero. Here’s the video of me handing them out and my speech:

And here’s my speech so you can read it and read the names of all the people who have helped!

With the help of a lot of people in this room, for the past 2 years, I donated comics to veterans’ hospitals, deployed troops and underprivileged kids.
Since last month we have donated over 30,000 comic books!

Some comics have gone around the world to places like Iraq, Qatar, Germany and Afghanistan, thanks to the 87th Logistics Readiness Squadron of the Air Force.
Some were given to VA hospitals like Walter Reed and the Lyons New Jersey VA Medical Center.

In New Jersey, some were even given to formerly homeless veterans when they moved into their first VA apartment.

And they have helped kids in New York and New Jersey stay out of trouble and get on their way to jobs and college.

My mom, dad and I want to thank all of you for your help. We could not have done it without you. Everyone who has helped and donated are truly superheroes! You put a smile on so many faces 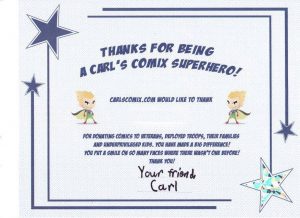 where there wasn’t one before!

I’d like to thank everyone who has pitched in and made a difference with this certificate, declaring you a Carl’s Comix superhero!
So, when I call your name, if you’re here, please come up so we can present this certificate to you:

Thank you all for making such a big difference!!

It has been an awesome experience donating comics and I will continue to for a long time!
True believers, thank you and ’nuff said!