The Birth of a Villain: Brian Muir & the Making of Darth Vader

Next up on the spook-tacular month of October, I talk with Brian Muir, the original sculptor of Darth Vader’s helmet and armor, Stormtrooper armor and the Space Jockey from Alien!

Carl: I’m here with Brian Muir, the sculptor who made Darth Vader’s helmet and armor for Star Wars and who has worked on over 60 movies.

Mr. Muir, did you always want to be an artist and a sculptor when you were a kid?

Brian Muir: I really got into it when I was about 13, at school and I would spend more and more time in the art room. When I left school, I was lucky enough to be the only apprentice sculptor ever in the film industry at the age of 16, so I was extremely lucky.

Carl: What made you want to work in the movies as an artist?

Brian Muir: Well, I always had a love for the film industry, but I couldn’t believe my luck when I actually had the possibility of an opening in the film industry. As I just said, at the age of 16, I moved into Associated British Productions, which was at Elstree Film Studios. So from there, we made small British films for the four years I did my apprenticeship.

Carl: Who were some of your favorite artists growing up?

Brian Muir: My favorite artists? Well, many of the Old Masters, really, the likes of Leonardo da Vinci, Michelangelo – many of those, their abilities were absolutely amazing.

Carl: You’ve worked on over 60 movies, but you’re most well-known for creating Darth Vader’s helmet and armor (which is really cool). What other work did you do that you think is even better, but fans like me might not know?

Brian Muir: Good question! In fact, my book is called In The Shadow of Vader the reason being that Vader is so iconic, that rest of the work I’ve done in the 48 years I’ve been doing the job is in the shadow of it. Things like the Space Jockey on Alien is a well-known piece now, I’ve worked on 10 James Bond movies and done lots of work there, 4 Harry Potter films, all 3 Indian Jones films that were made, the trilogy, famous films like Superman. And lately I’ve worked on films like Guardians of the Galaxy, Thor 2, Captain America, Snow White and the Huntsmen, various other films – they’re all recent ones. As well as the latest Star Wars film and Rogue One that comes out just before Christmas!

Carl: Cool! Ralph McQuarrie drew an idea for Darth Vader, but you made that idea into something real. What did you need to do to make Darth Vader’s appearance come to life? 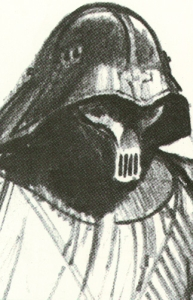 Brian Muir: Well basically, you have to work to the design you had. It wasn’t much of a design, I just had a small line drawing that I got from the costume designer John Mollo. You get it from one angle and from that one angle, I have to work out how it looks from every direction, 360 degrees, every part has to be right.

Carl: I saw that you’re working on Rogue One now. Is there anything you can tell us about your work on it?

Brian Muir: No, I’m afraid not. We have to sign a contract like that [holds fingers wide apart] with about 20 signatures. And it means I can’t talk about the film, I’m afraid.

Carl: Thank you for answering my questions, it was nice to meet you!

Brian Muir: I tell you what, your questions were very good!

Brian Muir: Thank you very much!

No posts were found for display