When I Got a Letter from Steve Ditko

On June 7 I wrote a letter to Steve Ditko to ask him a few questions. Steve Ditko is one of the creators of Spider-Man. He created Doctor Strange, too, and brought back Blue Beetle. He worked for DC, Marvel and Charlton. He started illustrating comics in 1953.

I asked him two questions: I wonder if there was a teacher who made you think about drawing comics? What did you have the most fun drawing?

Here is a picture of my letter to him. 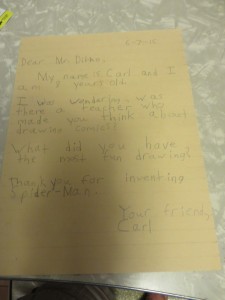 On Wednesday after camp I got a letter back from Steve Ditko! It made me feel really happy that Steve Ditko wrote me back and I got an actual letter from him. (Dad’s note: We were all bouncing off the walls feeling really lucky.)

He told me that “no teacher made me think about drawing comics. A teacher comes after one thinks or would like to draw comic book stories.” I think it’s cool that he came up with the idea of illustrating comics on his own.

He also wrote that “The most fun in drawing comics is the figures in action.” He also added what the hardest thing to draw was: mechanical things like cars, building and animals. Mr. Ditko also wrote that he had fun drawing Gorgo and Konga.

I did not hear about Gorgo and Konga before, but now I want to read about them.

I was really excited to get this letter and I really want to tell everybody who likes comics.

Here’s a picture of the letter he sent me. 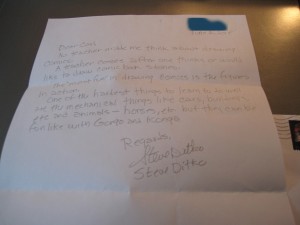