I’m here at Garden State Comic Fest with artist Adriana Melo, who has worked on Fantastic Four, Catwoman, Silver Surfer and Star Wars: Empire. She’s about to release a 6 issue mini-series about Plastic Man with writer Gail Simone, which is really cool. Adriana, I’d like to ask you a few questions for my readers.

(Sponsored by John Paul of NJComicBookShows.com on Patreon!)

Carl: First, I have to ask, did you come all the way from Brazil for the show?

Ms. Melo: Yeah, all the way from Brazil. It’s my fourth time here.

Carl: Wow! Do they have different comic books in Brazil, or were the ones from Marvel and DC just translated?

Ms. Melo: Ah, yeah, we have that, we have the American superhero stuff translated in Brazil. But, we have also a Brazilian character that is really strong. It’s more for kids. The comic book is called “Monica’s Gang” and it’s about a girl and her friends. I know this might sound weird, but this is true. In Brazil she is as famous as Mickey, Goofy, Donald Duck (Carl: Oh, wow!) Yeah, it’s big. She was created 50 years ago. There’s a long history in Brazil.

Carl: Wow, that’s cool! Who were your biggest inspirations as a comic book artist?

Ms. Melo: Oh, I have two. My references until now, whenever I have to do a cover or interiors, pages…I love Adam Hughes, both drawing and painting, I love his work, and I love Alan Davis. I like to say that my first comic book, the first one I read, was The Death of Superman (Carl’s note: check out my interview with Louise Simonson where she talks about this issue!), but the one that got me into comics was “Excalibur” from Alan Davis. He’s like my first, first, first, first artist, when you think about inspirations.

Carl: That’s neat. You and Gail Simone are about to release a new mini-series about Plastic Man. How do you collaborate with each other on a book – do you work differently with her than with other writers? 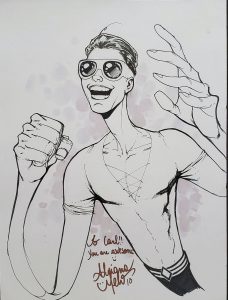 My Plastic Man by Adriana Melo!

Ms. Melo: Yeah, with Gail it’s my second time working with her. A long time ago we did “Birds of Prey” and I’m so, so happy to be working with her again. She’s super funny and easy to work with, easy to talk with. We exchange messages through Twitter or mail…we are always chatting. I really love her as a writer and as a friend, a co-worker. She’s awesome. Before the Plastic Man series, I did, for 2 years, Doctor Who comic books. I’m a big Who fan myself, big fan, and on my run of Doctor Who I worked with Cavan Scott and he’s a really nice guy. I did something on my own in Doctor Who that I never ever did before. Kevin was always super open about arcs, about characters, about ideas. So, we were always chatting about that. What about the new arc, which characters should we bring in, do you have any ideas, etc.? And, in one arc, he called me and said “Adriana, I have an idea. Since the last arc (the last 3 issues) were in the town where I was born, what about we have our next ARC in Brazil, in your city?” It was like, “Oh, my God.” I said, “Yeah, I love the idea!” So, we spent the whole day talking about Brazilian names, Brazilian places, Brazilian history, because, here’s the catch: he wanted just Doctor Who and traveling in time. So, the story was about São Paulo, my city. But, it was in the 1700s, it was not now. So, we spent the afternoon talking about Brazilian history, and in the end, I was credited as co-writer! (ed: Dr Who Slaver’s Song) I was penciler and co-writer! So, for me, it’s one of the coolest, coolest things in my career.

Carl: Jack Cole created Plastic Man and always drew him in crazy ways. Your art is usually pretty realistic. How hard is it for you to draw in the wacky way that Jack Cole set out for Plastic Man?

Ms. Melo: Yeah but here’s the thing, I do love to work with lightness and pictures and everything like that but, I also love the funny side of things, visual gags. I’m crazy about them. I love anime, I love manga, I love comedic stuff. So, doing Plastic Man, I can work…OK, in Doctor Who I used likeness in every, every, every issue. So, I had to use pictures all the time to make everyone look like the characters. But, with Plastic Man it’s more free, I’d say, work, style. So, I can do things my style and work those comedic gags that I love. So, for me it’s been easy because I’m working with the other side of the things I love.

Carl: Wow, how much of the series have you already finished?

Ms. Melo: The first issue is finished; I’m going back to Brazil Monday night, and I’ll tell you, it will be, me getting in Brazil, unpacking and jumping into the next issue and working like crazy. Yeah. First issue will be out in June.

Carl: You’re welcome. Do you know what you’ll be working on next?

Ms. Melo: I have plans, we’ve been talking about things. But, yeah, it’s kind of early. But, I kind of know.

Carl: You don’t want to jinx it?

Carl: I can’t wait to see it! Thanks for answering my questions, it was nice to meet you. 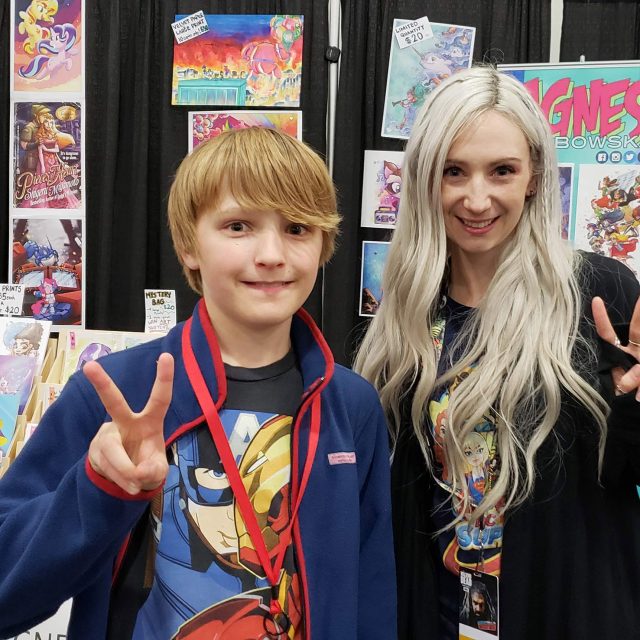