Behind the Scenes at Garden State Comic Fest with Sal & Dave

Garden State Comic Fest is on July 9th and 10th at the William G. Mennen Sports Arena in Morristown, NJ. I’ve been going to the show for two years, and have talked with Neal Adams and Ethan Van Sciver there and got a lot of cool stuff there, too!

It is run by Dave O’Hare and Sal Zurzolo, who I interviewed a few days ago.  I really can’t wait to go, it’s always a really good show!

I’m here with Dave O’Hare and Sal Zurzolo, the organizers of Garden State Comic Fest, to talk about comics and their show in Morristown this July.

Carl: How did you two meet?

Sal: Do you want to handle it?
Dave: We met playing poker. [Dad’s note – that’s a grown up card game, kids!] We met at a poker game.
Sal: Yeah.
Dave: We became good friends over the years and…
Sal: Dave took a lot of my money and I’ve been trying to get it back ever since!
Dave: So, in order to do that, I figured I’d start a business with him.

Carl: How did you get the idea to start Garden State Comic Fest? Did you run other comic book shows before?
Sal: Go ahead, you should tell that story. Because he’s the founder, actually.
Dave: Actually, I had never run a comic book show before. What we did was, a couple years back, I started buying original comic art for investment purposes and I went to New York Comic Con and I said, “Wow, what an amazing show! Why can’t we bring something like this to New Jersey?” And I thought about it for a while and one day we were playing poker and I said my idea out loud and another gentleman said, “I bet you 20 dollars you could never do that.” So I went out and spent thousands of dollars to win the 20 bucks. And that’s how Garden State was born.

Carl: What is it like to run a comic book show like yours?
Sal: It’s a lot of hard work! It’s not just renting a space and saying “OK people, come on down!” You’ve got to stay on top of it every day. We both got different things we do in our day lives – Dave runs a business, I work for lawyers – and so we essentially do that during the day and all our other spare time is spent promoting the business. You know, you’ve got to not only get people to walk through the door on the day of the convention, you’ve got to people to sell at your show. You’ve got to bring in comic book artists and creators and guests.

Dave: You have to bring people what they want.

Sal: And you got to bring in some great comic book dealers. We’ve got tons of people to sell lots of comics, from the Golden Age all the way up to the new stuff – and at all different price levels. We wanted to have something for everybody. We’ve got some serious collectors who spend thousands of dollars on comics and we have kids who are just starting out who only have a quarter or 50 cents for a book or a dollar and they can just go through these bins and buy up a ton of stuff. And we’ve also got toys – and other stuff.

Dave: It’s also key to surround yourself with good, competent people, your friends and family – people who have the same goals as you. Like Evan over there, who will not be in this video!

Carl: What are the fun things about running the show?

Dave: The fun things? I would say the most fun is actually – my two most important things to see at a show are, I want to see people walking around with bags in their hands, because that means they’re buying and they’re supporting the vendors that are coming and are putting their faith in us to put the show together.

But the other most important thing I’m looking for is smiles. Because it is very important to me to make sure everybody has a great time. And if they’re having fun, I’m having fun.

Sal: And that’s the same answer for me. We take a lot of pride in knowing that we’re the highest-rated comic book convention in New Jersey. We’ve gotten a lot of people through the door and got really good reviews and great comments from people. I don’t want to say we’re perfect, but we’re working towards that!

Carl: What isn’t so much fun?

Dave: Insurance.
Sal: Yeah, some of the business stuff.
Dave: Dealing with the business side of it and to answer that question, it’s the tedious work that comes into it behind the scenes.
Sal: Meeting people and talking to creators and talking to vendors, that’s the fun part. Talking to people – we’re both people-people. Booking hotel rooms, booking flights – that’s some of the boring stuff. It’s not so much fun. But for the most part – paying bills is not fun! Keeping track of your expenses and all that business stuff isn’t all that much fun.
Dave: Paying Evan!
Sal: Paying Evan, the big bucks. He’s our general manager over there. But the fun stuff vastly outweighs the not-so-fun stuff.

Carl: I noticed that last year, the show had grown a lot. Will the show be even bigger this year?
Sal: Absolutely.
Dave: Yes it will, actually the show will be over twice as big than last year. We are going to 80,000 square feet. We will have two arenas. Remember the size of the show last year? It’s going to be double that! Another room the same size!

Sal: Plus, we have that grand hallway between the two arenas that will be filled with things to do and guests to see. We’re bringing in bigger and different guests so it won’t be the same show exactly as last time – a lot of people will be returning. In fact, one of the reasons we needed to double in size was because everybody who was there last year wanted to come back, and some of them and some of them wanted more space! We didn’t want to put on exactly the same show, so we added another room and brought in a lot of different people. We’ve got different costume players. We’re bringing in the guy who has been seen at all the big conventions around the country, who is dressed up as the Iron Man Hulkbuster. He’s 9 feet tall and this wide.
Dave: Extreme Costumes’ Thomas DePetrillo.
Sal: We’ve got a lot of great costume players – people have a lot of fun with those. It’s going to be a really exciting and electric environment.

Dave: Not to mention, we’re bringing in comic legends such as Kevin Eastman this year, Jim Steranko, Greg Hildebrandt is coming back (Greg just loves our show).

Sal: We have a husband a wife duo…
Dave: The couple Louise Simonson, Jan Duursema, Tom Mandrake and their daughter Sian, … Lee Weeks, which has not been announced yet…
Sal: It will be announced by the time you air! And we have a lot of great independent comic book artists. Creators Brian Pulido, Billy Tucci, Budd Root. They’re all from all around the country and they’ll come to the show. And we’ve got a lot of great up and coming artists! They’ve graduated from the Kubert School – it will be well represented. You’ll be able to get some great sketches and meet them before they become super-megastars!
Dave: Such as Squarriors creator Ashley Witter and Ash Maczko, coming in from Chicago.

Carl: How do you choose who to invite?
Sal: Well, we look for people who are great people-people (people persons).  We want them to have a certain level of notoriety and fame. And something unique about them.
Dave: We try to bring in the people that the fans want to see.
Sal: Right! That’s the most important thing. We can like a lot of artists that, frankly, other people might not like. Art is very subjective, so we try to bring in people who have a lot of popular appeal. But again, we want them to be nice people, too, because want our fans to be happy when they meet them.

Carl: And now, two questions that aren’t about the show: Who is your favorite superhero?
Sal:  Mine is the Flash.
Dave: Superman.

Carl: What’s your favorite comic? And what is it you like so much about it?
Sal: You mean a single issue or a whole run?
Carl: Single issue.
Sal: One of my favorite issues is when Superman and the Flash race. Actually, I like all those issues. The other one that’s really up there is Fantastic Four when the Hulk and Thing fight and it looks like the Hulk killed the Thing at the end. (He didn’t really, sorry – spoiler alert! I should have said that first). But I love that cover! It’s a black cover with the Hulk and the Thing going at it. It’s just my favorite cover of all.

Dave: My favorite issue of all time is GI Joe #5 because it’s the first comic book I ever got, and currently my favorite book on the market today is Squarriors.

Carl: Thank you for answering my questions. I can’t wait to go to the show! 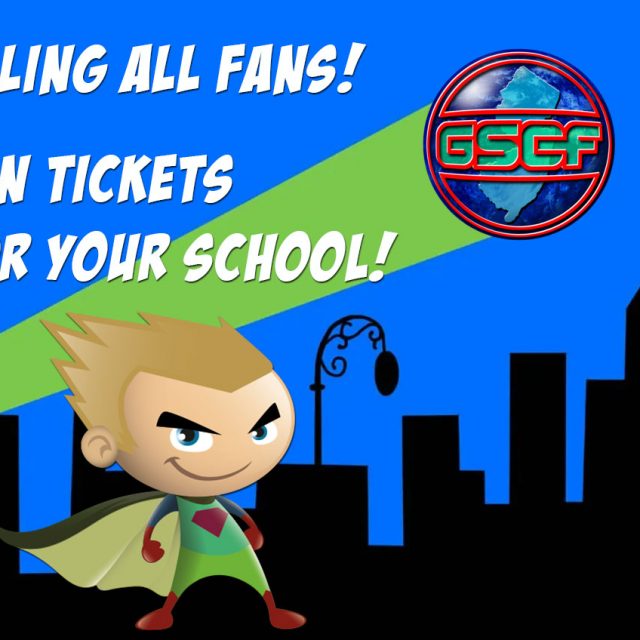