It started when one of my subscribers asked me what I thought about donating comic books to veterans in hospitals and soldiers overseas. I thought, “That would be a good idea, because I want people to enjoy comics like I do.”

I picked out about 300 comic books of my own and then Steven Donohue, one of my father’s former students, got us in touch with Jennifer Myers, who Change Management Agent/Analyst in the Public Affairs Office of the Newark Regional Office at the Department Veterans Affairs/Veterans Benefits Administration. We asked Jennifer if we could donate comic books to the veterans, and she really liked that idea. She worked with Mary Beth Hynoski at the Lyons VA Hospital to set up a time for us to visit the hospital to donate the comics, so now I had to get busy collecting more books!

At one of the Pug Productions comic book shows run by our friend John Paul, I stood up on a table and announced my plan as loud as I could and asked if anyone could give me comic books to donate. Some of the people who gave me comic books were Michael Williams, a comic book dealer who is also a teacher in Newark, NJ, Paul Castiglia, who writes for Archie Comics, Jeff Beck of East Side Mags, collector/dealer Adam Solomon and author Laurie Jeffers. Overall I collected about 3,500 comic books for the veterans. 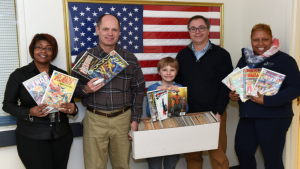 Dropping off comics at the V.A. hospital – that’s Jennifer on the right!!!

On January 18, my dad and I went to the Lyons Veterans Hospital in Basking Ridge and met Jennifer, Mary Beth and some of the staff. We gave them 400 comic books (because that was even more than they asked for) and talked to them and took some pictures. They felt really grateful for the donation because all of the books would go to veterans in the hospital who need something fun to read and something to cheer them up. I was really happy that they were so excited about them.

Now what to do with the thousands of leftover comic books??? Jennifer had an idea! Stay tuned…