Dustin Nguyen: Do Your Own Thing

Dustin: That’s me.
Carl: Dustin, I’d like to ask you a few questions for my readers.
Dustin: Let’s do it.

Carl: Did you want to become a comic book artist when you were a kid?
Dustin: I wanted to be an astronaut, honestly. Until I was in fifth or sixth grade, yeah.

Carl: What comic books did you read when you were a kid?
Dustin: I read a lot of Ninja Turtles – Teenage Mutant Ninja Turtles. Some Batman, but mostly I read a lot of Marvel. That was like, my thing. I was like, I was all up to date on Spider-Man, X-Men, stuff like that. (to the camera) Can you hear me?
Carl: I interviewed the person who co-created the Teenage Mutant Ninja Turtles. [Check out my interview with Kevin Eastman if you haven’t already!] Dustin: Oh, did you?
Carl: Yeah.
Dustin: Awesome! How’d that go?
Carl: Good!

Carl: What (other) comic books did you read when you were a kid?
Dustin: Um, Ninja Turtles, that kind of stuff. My favorite book was actually Power Pack by Louise Simonson. It was a great book.

Carl: What comics do you read now?
Dustin: I’m trying to find time to finish up Blade of the Immortal and I still haven’t. I’ve just been really, really busy. 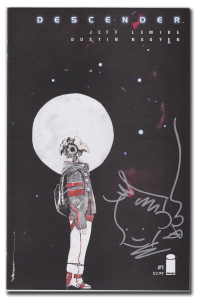 Carl: Cool. You and Jeff Lemire created Descender, a comic about a mysterious relationship between robots and humans. How did you two come up with the idea?
Dustin: Jeff actually contacted me and I was actually looking, I was, like, ready to contact him. We both had finished up our contracts with DC, and we were just looking to do something ourself. And we tried to find something that he liked writing and I liked drawing.

Carl: Cool. Your art for Descender doesn’t look like any other comic book I know. It’s more artistic, almost like watercolor on paper. It’s really cool. How did you come up with your style?
Dustin: Um, you know, I’ve just been drawing forever and it was something I was comfortable with. I enjoy painting and I figured that I could use the time to practice painting, so, yeah.

Carl: Cool. Did people ever tell you that your style is too different for comic books and you should change? Or did people encourage you to do your own thing?
Dustin: I was fortunate to work with a lot of great editors that, they kind of encouraged it, to do your own thing, and they liked what I did, and they were really nice. But I do, I do understand a lot of times they do want you to change for certain projects. When I worked on, like, for toys  and for animation stuff they would ask you to change it, which is OK because it’s their property, you know? But, you know, in comics, I’ve been fortunate enough to work with people that allow me to do whatever I want.

Carl: Cool. What are you working on now? 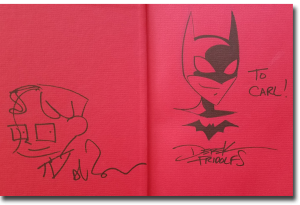 Study Hall of Justice sketches Dustin and Derek Fridolfs drew for me.

Dustin: Uh, I’m working on Descender issue 17 and we just finished Secret Hero Society Book #2! So that comes out next February.

Carl: Cool. One last question
Dustin: Yes.
Carl: Are you having fun at the show?
Dustin: I’m having an excellent time, and I got to meet you!

Carl: Thank you for answering my questions. It was nice to meet you.
Dustin: It was great to meet you, man. Thanks. 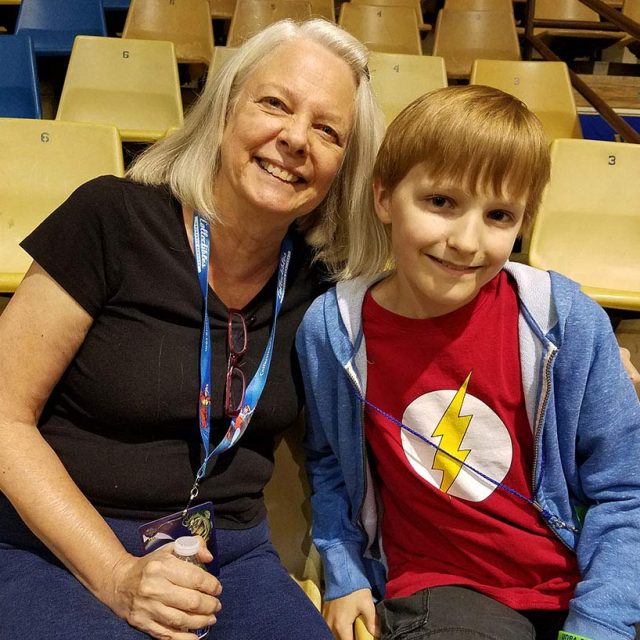 Behind the Scenes at Garden State Comic Fest with Sal & Dave 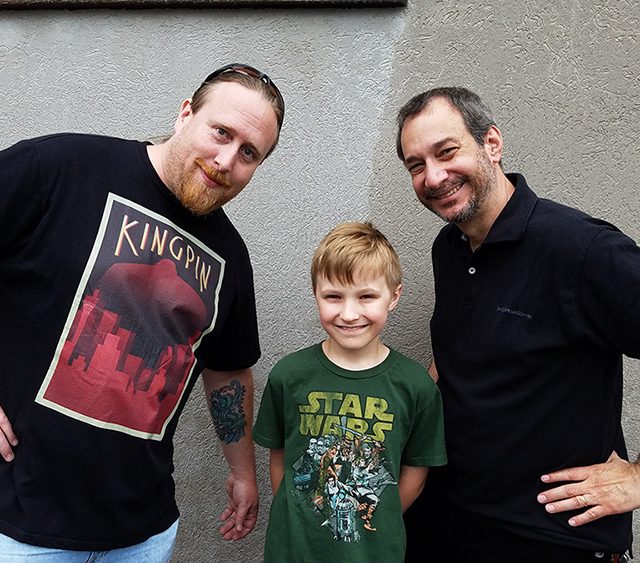