Carl: I’m here at Garden State Comic Fest with actor John Wesley Shipp, who played the Flash in the original series in the 1990s and now plays Henry Allen and Jay Garrick in the new Flash series on the CW. Mr. Shipp, I’d like to ask you a few questions for my readers.

Sponsored by NJComicBookShows on Patreon!

Carl: Did you want to become an actor when you were a kid?

John Wesley Shipp: When I was a kid, I wanted- I was going to be a musician, I studied piano from the age of 4 and then I went on voice scholarship at the music department at Indiana University before switching my major to theater and then moving to New York to become an actor. 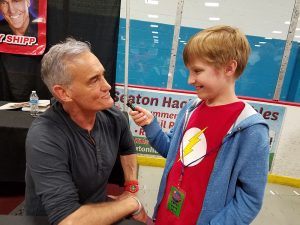 Carl: Interesting. I read that, when you were a kid, you didn’t really read comic books. What hobbies did you have?

John Wesley Shipp: What hobbies did I have as a kid? I basically- it was all revolved around music. I didn’t really have a hobby like comic- collecting comic books or collecting things like that.

Carl: Did you have to read comic books for the show then or now?

John Wesley Shipp: You know what? In the 1990’s show, I pretty much took everything I needed from the hour and a half original movie script that Danny Bilson and Paul De Meo wrote because all the human values, the relationship values were in there, plus Danny and Paul knew so much about the history of the character and the comics that they were sort of a resource. Interestingly enough, now, when I’m playing Jay Garrick I learned and I researched more about the relationship between Jay Garrick and Barry Allen. So, I actually did more research that was apart from the script for Jay Garrick than I did for Barry.

Carl: Neat. When my dad first saw you on the new Flash show, he paused it to explain to me why it was so cool that you were on. When did they contact you about being on the new show?

John Wesley Shipp: When did they do what?

Carl: When did they contact you about being on the new show? 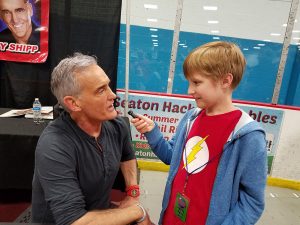 John Wesley Shipp: Well I heard that there was a new show coming and then I heard that there was a new imagining of the Allen family. See in my version, my dad was not wrongfully convicted of killing my mom in front of 10-year-old me, but of course, that’s the story in the new show. I said that if they come to me, that’s the role I would want. And so, they contacted me and they made the offer and then I saw Grant Gustin’s work on Arrow, when he appeared on Arrow, and I thought that it would be a really good fit, we would play father and son really well, and so I said yes.

Carl: Neat. Did you know your role would grow to play Jay Garrick, too?

John Wesley Shipp: I did not know, I did not know until the end of season 2, shortly before it happened. They kept that a very closely guarded secret.

At this point in the interview, there was a technical problem with the recording. Sorry about that Mr. Shipp!

But here is my last question and Mr. Shipp’s answer:

Who do you think would win in a race between Barry, Wally and Jay Garrick?

Mr. Shipp said: The fans! I actually took that line from somebody else, but I always think that when there’s a race like that, it’s a win for the fans.

Thank you to John Wesley Shipp for answering my questions. It was really nice to meet you and I can’t wait for the new season to start!