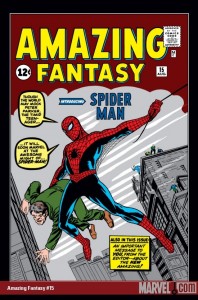 I don’t have the original Amazing Fantasy #15, but I do have a reprint of it.

It’s kind of sad and kind of cool. It’s sad because Uncle Ben dies in it. It’s cool because it shows you how Peter Parker becomes Spider-Man. Spider-Man makes up for Uncle Ben’s murder, which he could have stopped, by fighting villains. It’s the start for him fighting all sorts of villains, like Sandman, Green Goblin, Dr. Doom, Venom, Kraven the Hunter, the Vulture and lots of others.

Before I read it, I wondered how Peter Parker became Spider-Man. The first time I read it, i thought it would make more sense for Flash Thompson to be Spider-Man because he looks more like a hero. But it turns out that Peter Parker is the one worthy of being Spider-Man. He wasn’t a bully. He wanted bullies to stop bullying him. 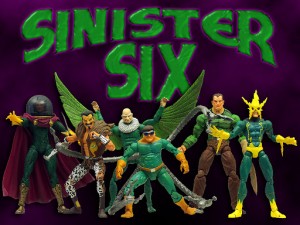 It’s a really good comic book and when you read it, you’ll like Spider-Man, too.