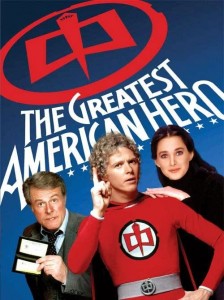 We started watching an old TV show called “The Greatest American Hero” two days ago. It started in 1981 and ended in 1983. We watched the pilot, which means it was made to test it out to see if people like it before they made real episodes of the show.

The show is about a teacher who accidentally becomes a superhero. Aliens gave a teacher named Ralph a suit that gave him super powers. The aliens told Ralph and Bill, an FBI agent, to work together to fight against skinheads, which are bad guys. Everybody thinks Ralph is crazy for wearing the suit and thinking he can fly and look at a wall and see that Bill was in trouble. When the girl that’s helping him finds out that he’s not crazy, she faints for a moment.

I thought that it was pretty funny and mysterious. It’s funny because Ralph keeps crashing when he’s trying to fly and he was always yelling “I’m telling you, I’m not crazy!” It’s mysterious because you don’t see the aliens, you only see Bill’s dead partner who was killed in the beginning but the aliens took him and made him a part of their team.

You can find the pilot on YouTube (Dad’s note: all the regular episodes are on Hulu). Here’s the video of the pilot for you. I hope you like it!