Thanks as always to NJComicBookShows.com for sponsoring this interview on Patreon!

Carl: First, a personal question: How did you get your nickname Weezie?

Carl: Oh! Neat! What comic books did you read when you were a kid?

Mrs. Simonson: I read duck comics, and Superman, and the Lone Ranger, and Turok Son of Stone, I think, and those are the ones that I remember.

Carl: Are you excited for the new Duck Tales show?

Mrs. Simonson: I think it’s gonna be pretty cool! Are you excited for it?

Carl: Did you want to become a comic book writer when you were a kid?

Mrs. Simonson: No, it never occurred to me to be a comic book writer. I kind of never even thought about the fact that there were comic book writers. I read a lot of books, I got a little bitty allowance. I got 10 cents a week when I was your age. 10 CENTS! 10 cents would buy a double scoop ice-cream cone or 1 comic book.

Mrs. Simonson: This is back in the olden, olden days, a really long time ago.

Mrs. Simonson: 60 years ago, dude! That’s a long time! My mother took us to the library every week! I had 3 little sisters, and we would all come home with stacks of books like this! Like, 10 books they would let us take out at a time! So, every week we would come home with 10 books and with all the books together it was 40 books to read! So, I could spend my 10 cents on a comic book which I’d get through pretty fast or I could spend it on an ice-cream cone! So, I read a lot of books and had an ice-cream cone.

Mrs. Simonson: It was nice! It was lovely!

Carl: When you were a kid did anyone ever tell you that comics weren’t for girls?

Mrs. Simonson: No, nobody ever told me that. Did anybody ever tell you that comics weren’t for girls?

Mrs. Simonson: No. Yeah, I don’t know what kind of crazy person would say something like that!

Dad: I’m going to do a rare dad follow-up and say: he has a lot of friends that are girls who say comic books aren’t for girls!

Mrs. Simonson: Well then, they just aren’t reading the right comic books! Some of the comic books actually, I think are boring for girls. I mean girls are certainly allowed to read them. But, I personally find comic books that- you know, they don’t even make them so much anymore, but, back in the olden days they would do comic books were just these- a couple of big guys would fight over nothing and one of them would win and that would be the end of it, and I did not think that part is interesting. The part that I thought was interesting was when characters had emotions and felt things and worried about things, worried about if they were going to win or lose and there was something at stake when they won. That they were fighting about something real. And that’s what made it more interesting to me. I’m just more interested in characters. So, I think that probably, maybe the girls just haven’t found the right comic books yet.

Carl: Chris Claremont told me that there’s no difference between writing good girl characters and good boy characters. Do you agree?

Mrs. Simonson: Yes, I do! Chris is one of my really good friends and I worked him for a long time and I do agree. I think that people are people. What you need to do about a character is what they want and what they need. Sometimes what they want is different from what they need. Like, what they want is to defeat this giant villain who’s threatening the Earth, but what they need in their heart might be something different. Everybody has insecurities or things that they are worried about, and I think that sometimes people really need things that are different from the large scope of some big battle that they’re in. Sometimes the most interesting stories are when they need one thing but they want something else. Like, they need to defeat the villain but the villain is actually their best friend from childhood, and then you got a conflict, you got the characters really, really worrying about how they’re going to react and what they’ll do and what happens if they hurt their friend, but they know their friend has turned into a bad guy. Then, you’ve got a story that is interesting. But, that can happen with boy characters or girl characters, it doesn’t really matter. It’s what people want and need that’s more important than if they’re men or women in the story, I think.

Carl: Neat! You wrote a book called DC Comics Covergirls about the history of girl characters and how they’ve changed. What did you think of the new Wonder Woman movie?

Mrs. Simonson: I haven’t seen it yet!

Carl: Oh, you really need to see it!

Mrs. Simonson: I know it’s going to be wonderful! I have heard such great things about it! I’ve heard that Gal Gadot, it’s like she really is Wonder Woman in the movie!

Mrs. Simonson: You know, we’ve just been so busy. We’re going to San Diego Comic Convention, and we have all these deadlines, because we’ve been goofing off a little bit! So, we didn’t get things done in a timely fashion. So, ever since the Wonder Woman movie came out, we’ve been working, working, WORKING! I haven’t even gotten on Facebook hardly! Uh! How TERRIBLE is that?! So, yeah, we haven’t even, we keep planning to go see it and then some other deadline comes up. So, we’ll see it! If we don’t see it here we’ll see it in California when we go to San Diego. 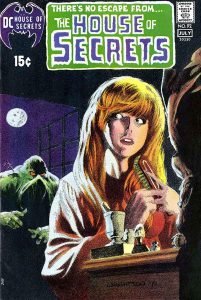 Carl: Neat! You were Bernie Wrightson’s model for the cover of House of Secrets #92. How did that happen? Did you do that kind of work again?

Mrs. Simonson: Ha! Well, it wasn’t work exactly. Bernie lived in the same apartment building I did, and for some reason he and Mike Kaluta and Jeff Jones and several of the young artists at that point. – we were very young at that point, we were all probably in our early twenties. They were wanting to work from photographs instead of just making stuff out of their head. Which, is actually a good idea, it’s a good way to learn to draw things the right way. Bernie asked me to pose for this comic book that he was doing, which was called Swamp Thing, and I said OK. So, I acted out the part the heroine and I think Mike Kaluta was the villain. Do you know who he is?

Mrs. Simonson: He’s an artist, a really, really fine artist, he does a book called Starstruck right now, and I think he’s done a lot of movie designs and things like that. He’s a really, really fine artist, so he was the villain and it was fun. There are a batch of photographs floating around of me and that whole story and me and Michael and, I think Bernie is in the story too.

Carl: Neat! You created Apocalypse and co-created Doomsday, both really great villains. Do you have a favorite villain to write about?

Mrs. Simonson: Oh gosh! I kind of like Apocalypse. For me he has a good conflict. You know, I was talking about this eternal conflict that the characters have. I think Apocalypse is trying, in my run, his motivations have been changed since when I was doing the comic. But, in my run he knew that bad stuff was going to happen to the people of Earth. He knew these giant creatures called Celestials were going to come back and judge the fitness of Earth, and he wanted people to be strong enough to fight them off. So, he was trying to force humanity to get stronger, to turn into mutants, to get stronger and stronger and stronger so that when the Celestials came to judge Earth that they would be strong enough to withstand them in case they got thumbs down. In order to do this, to make people stronger, he wanted to kill off the weak people and have the strong survive. So, he started wars, he tried to do all sorts of bad stuff, to kill off the weak people and make the survivors stronger. Until finally he got to mutants and when the mutants were actually strong enough to defeat him, then he had won. He won by losing, because he had finally created creatures that were strong enough to defeat him. That was my Apocalypse. I don’t know, I kinda think that maybe the movies didn’t have that kind of Apocalypse in mind. But that’s why I love Apocalypse. Because I think the idea of a character who wins by losing, it kind of interests me.

Carl: Who do you think would win a fight between Apocalypse and Doomsday?

Mrs. Simonson: Oh, golly Moses! Let me think, I think Apocalypse would win for sure.

Carl: What do you think makes a really good villain?

Mrs. Simonson: For me – now a lot of people think it’s just powers and costumes, and those are really important, costume, the way a villain looks is really important because when people pick up a book, if it doesn’t look cool they’re not going to want to read the comic. But, for me it’s like what does he want, what does he need, and why can’t he have it. Those are the 3 things that really make up a good villain. It’s motivation, what drives him and who’s trying to stop and why. But, that’s for me, that’s the most interesting part. The powers are just fun to make up.

Carl: Neat! Artist Dustin Nguyen told me that Power Pack was his favorite comic growing up. How does it make you feel when comic book creators tell you that you were a big influence on them?

Mrs. Simonson: It makes me feel wonderful! And really pleased! You know when I did comics, particularly when I did Power Pack which was the first comic book I did, I worked really hard to make it good and it makes me really happy to think that I made it good enough that people really liked it.

Carl: Neat! Which did you have more fun working on – killing off Superman or killing off Galactus?

Mrs. Simonson: Oh, golly! I had different kinds of fun, because when I killed off Superman I was killing him off with this big Superman team, and we ALL killed him off. One at a time, we each got to strike a blow! But, when I killed Galactus, I got to kill him all myself! So, I guess maybe I had more fun killing Galactus! But, I got more money from killing Superman because we got royalties on that one! They were really good!

Carl: Thank you for answering my questions. It was fun talking with you.

Mrs. Simonson: It was my pleasure! Thank you for asking good questions!

And thanks to Garden State Comic Fest as well as my top sponsor on Patreon, NJComicBookShows.com!